10 interesting facts about Frankfurt am Main

1.Near Frankfurt (in Friedberg), Elvis Presley, the king of rock and roll, resided from October 1958 to March 1960. In his honor, the city authorities decided to pay homage to this great music man in an unusual way (with the approval of most fellow citizens). Specifically, all city traffic lights at pedestrian crossings were given a new look. A red silhouette of Elvis with a microphone indicates that pedestrians should stop while green playful Elvis urges pedestrians to cross the street.

2.Frankfurt am Main is known by the nickname “German Manhattan”. It is the fifth (largest) city in Germany and the largest city in the German state of Hesse. Frankfurt am Main is different from the rest of Germany. Concrete, glass and steel skyscrapers are home to more than 5 million people and the many powerful, world-renowned companies that make up the so-called. Mainhattan, a significant financial and business center in Frankfurt. In addition to economic prosperity, Frankfurt is also a very traditional city, with numerous inns offering the Germans favorite apple wine and traditional food, outdoor cafes and various shops, beautiful parks and the promenade along the River Maine. Another advantage is the city’s cultural offerings, from museums to galleries, often overcrowded with the ever-growing student population enjoying the Frankfurt nightlife.

3.Frankfurt has two airports: Frankfurt am Main and Frankfurt Hahn. Frankfurt am Main Airport is one of the largest airports in Europe, so be prepared for many walks. The port has its own train and bus station, so you can easily reach the city center. Frankfurt Hahn Airport is 120 kilometers from Frankfurt and is mainly the base for low cost carriers, so it is advisable to double check where your plane will land and which of these two airports is better for you (if you are traveling elsewhere in the region).
4.The Old Town is the most beautiful part of every city – in Frankfurt it is its central part of the city, the so-called Römerberg. It is an irregularly shaped square with the Fountain of Goddess of Justice. It is the busiest promenade in the city with many tourist attractions such as Römer, a complex of several buildings built between the 15th and 18th centuries. These are the Old Town Hall (Altes Rathaus) and its Imperial Hall. Add to that the History Museum, founded in 1878, which has the best exhibits from medieval to modern Frankfurt in its collection.
5.Frankfurt am Main is home to one of the most modern museums of natural history in Europe (and the second largest in Germany) – The Senckenberg Museum of Natural History, located within the Senckenberg Gardens, houses the largest dinosaur exhibition in Europe and numerous displays of Earth’s biodiversity and evolution. Also, this is where you can see the world’s largest collection of prepared birds. The museum is open daily from 9am to 5pm (sometimes until 6pm or 8pm). Ticket price is 9 euros. English language museum tours and audio guides are available. 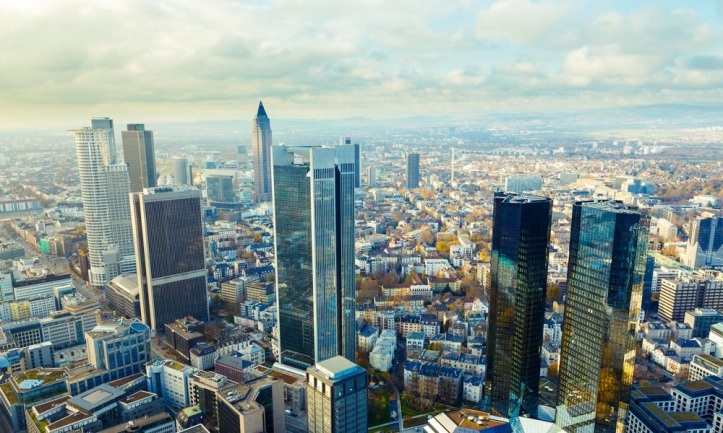 6.Frankfurt is a cultural center because there are plenty of museums for visitors / tourists. Don’t miss the Museum of Modern Art, considered one of Europe’s most important contemporary art galleries since 1991. Its collection includes more than 5,000 works from 1960 to 2000, as well as works by Andy Warhol, Roy Lichtenstein and other well-known artist. If you are more a fan of Rembrandt and Goya’s works, then head to the Städel Museum of Art.
7.One of Frankfurt’s most popular attractions is the Opera Square with the Old Opera House (Alte Opera), built in 1880 in Italian Renaissance style. Although destroyed during World War II, it was rebuilt and reopened in 1981 and has since been the city’s most important venue for concert events. The city has another opera house, Oper Frankfurt, which, together with the Schauspiel Frankfurt Theater, makes the state-of-the-art concert venue known as the Opern-und Schauspielhaus Frankfurt.
8.Frankfurt is the birthplace of the most famous German writer, Johann Wolfagang von Goethe. Although his house was also destroyed by World War II, they were later completely renovated with original furniture and belongings belonging to the Goethe family. The house is located at Grosser Hirschgraben.
St. Bartholomew’s Cathedral is built of red sandstone in the Gothic style. This cathedral is 95 meters high. It was built between the 13th and 15th centuries and goes beyond some skyscrapers in the city.
9.Palm Botanical Garden is the largest botanical garden in Germany. It is a breathtaking place for the visitor. Located on Bockenheimer Landstrasse, it has been attracting visitors since 1871. The biggest attractions in the garden are the outdoor botanical exhibitions and the numerous greenhouses with subtropical and tropical plants. There are recreational amenities such as picnic areas, a playground and rowing boats.
10.For lovers of delicious German cuisine and maximum enjoyment, visit the Medici, Moriki or Holbein’s restaurants. If you want to save money, the best places (where the meals are delicious and cheap) are Pizzeria 7 Bello, Toh Thong and Fletchers Better Burger. Top of Commerzbank Tower – is the only lookout point that is publicly accessible to all of the city. At the top of the tower you can have a cocktail at the bar and dine at the restaurant with amazing panoramic views.
Frankfurt am Main is a city where you will spend an unforgettable vacation!