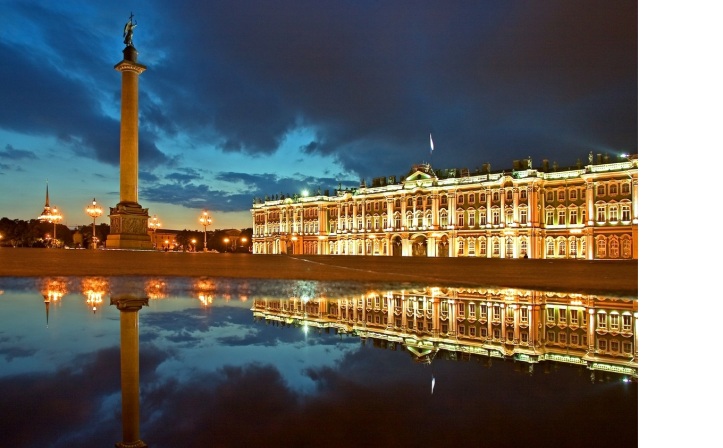 Deep in the Gulf of Finland in western Russia and at the mouth of the Neva River is St. Petersburg. Known to some as Leningrad (from 1924 to 1991). Today it has a population of about 4.5 million people after numerous historical upheavals. It is one of the most beautiful cities in Europe. The historic city center and its associated ensemble in St. Petersburg and the Petrograd region are listed as UNESCO World Heritage Sites.
Wanting to bring Russia closer to Europe, Tsar Peter the Great founded St. Petersburg. 1703 began the construction of the Peter and Paul Fortress, which became the first masonry structure of the new city at the mouth of the Neva. Peter appreciated European culture, so famous builders and architects drained the swamp and built one of the most modern cities of the time. Many people call this city Venice of the North because of the hundred or so smaller bridges across the innocent tributaries and the intricate network of canals.
The city is modeled after Paris, which can be seen on the facades of the city. Peter. Due to the strong influence of the West, this city was never named in its native language. Now St. Petersburg is a kind of Russian window to Europe because it is a rich mix of the most beautiful frames of the European capitals. It is also a place for European influence to spread. Upon arrival in this city, realize that there is an oasis of architectural splendor here. Huge “brochures” (wide avenues), imperial palaces and parks, ornamental facades of buildings, give the impression of trips to the past, when other understandings of beauty and splendor were worth it.
On the streets of the city is a fascinating contrast of wealth and luxury. Broad avenues breathe in the spirit of times past and stretch for miles through the city. The extreme misery and poverty are intertwined with the old and the new splendor. The lasting Lade, Volga and Moscow contrast with Bentley, and Rolls Royce cars. Traffic is chaotic with mandatory full throttle and infrequent neglect of traffic lights.

In Russia you can buy a driver’s license for 3000 rubles (approx. 75 Euros). Compounding the incompatible in Russia is part of life. All this gives a special charm to this city and country. St. Petersburg is a fairly expensive city in total disproportion with the average salary (450 Euros). Fuel and cigarettes are quite cheap. Babochka is the most famous department store.
There are about 200 museums in the city, many of which are housed in historic buildings. Along the Neva coast is the famous Hermitage Museum. The interiors of the former imperial residence contain a huge collection of art and archaeological objects from around the world.
Empress Catherine II the Great founded the Museum in 1764. It is housed in 6 palaces including the Winter Castle. The personal apartments of some of the famous Russian figures (Alexander Pushkin, Fiodor Dostoevsky, Nikolai Korsakov) have been turned into museums. The city has more than 50 theaters. Among them is the Marinsky Theater in the world (Kirov in the Soviet Union). It is home to the Marian Ballet and Opera.
Along with the imperial palaces are preserved sailboats and 127-meter gunboat Aurora. Aurora marked the turning point of 1917 (during the October Revolution) as a turning point in St. Peters-burg and Russia. Every building, every street, every window is illuminated at night which is a sight to be experienced once in a lifetime.
One of the attractions in the city is night bridges. From April to November, during the navigation period, 22 bridges over the Neva are erected to pass the ships. The greatest pleasure is to walk along the main 5 kilometer long Nevsky Prospect. One of the many channels offers a view of an impressive church called the Church of the Savior in Blood.
The grayness of communism left no mark in this city. Only in the outskirts of the city are the colors and luxuries lost in the monotonous architecture of communist convenience, all the way to the southern suburbs. These suburbs are famous for their former Imperial residences, fountains, water fountains and parks. Such is the small town of Pushkin, 24 kilometers away. The city of Pushkin is named after the famous Russian poet and father of modern Russian literature who died there. In Russia and the world, this town is better known as Tsarskoe Village.
It was modeled after the French Versailles. This was the summer residence of Russian emperors from the eighteenth century until the fatal October Revolution. It is Pavlovsk Castle (one of the largest English parks in Europe), Yekaterinburg and Alexander’s castle. Concerts are held today in the magnificent residential buildings of the Romanov family. St. Petersburg is a postcard for many European cities to see in the summer because of the White Nights and in the winter because of the snowy idyll.
http://www.visit-petersburg.ru
http://www.saint-petersburg.com
http://eng.ispb.info/
http://gov.spb.ru/en/
https://saintpetersburgcb.com/en/
https://eng.russia.travel/
http://www.lentravel.ru/eng/
http://vk.com/visitpetersburg
https://www.facebook.com/VisitPetersburg

Hello, everyone! My name is Nadiia, you probably noticed, I have another blog about healthy eating and sports, it is my passion) As for this blog, I just decided to share my thoughts, my feelings. Do not judge, I am not a professional writer, I just trying to express myself.