San Francisco has a special location because it is surrounded by a bay on one side and mountains on the other. The city is located on the Pacific coast.
Market Street is the busiest street that intersects the city in two sections, connecting Twin Peaks in the distance and Ferry Terminal at the beginning of the street. Cable Car are cable-hauling trams that climb the steep streets of San Francisco. Cable Car trams depart from Market Street and drive through the city for several kilometers. At the end or at the terminal there is a famous tower and clock building.
For transportation, it is best to buy a daily ticket that allows you to take all bus and tram lines and use Cable Car. For basic city sightseeing, the best option is a Hop On rooftop bus. During a two-hour ride with a professional guide, the bus will take you through all the most famous parts of the city. The Hop On bus start station is in Union Square.
Powell Street is the starting point for Cable Car from where you can take a tour of Fisherman’s Village and the Golden Gate Bridge. Cable Car does not rotate on its own, but there are round platforms where drivers manually rotate them. Driving is fun and noisy, which is a good way of sightseeing. The tram runs past Chinatown, and winding Lombard streets downhill to Fisherman’s Village. It used to be a fishing port. Today it has been turned into a wharf tourist complex with many restaurants, bakeries and tastefully decorated shops. 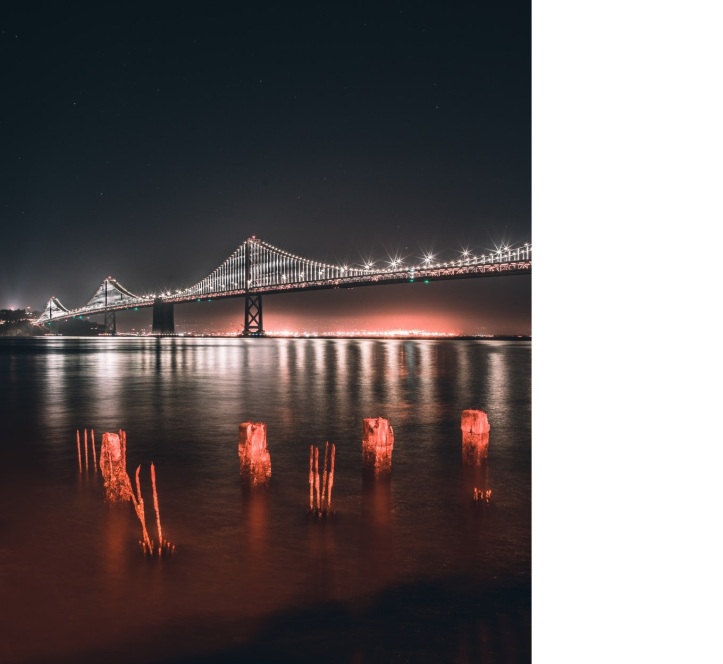 The whole complex is large so it will take you several hours to get around. Across the bay is the Oakland-city bridge connected to San Francisco. It is mandatory to visit Alcatraz Island where the prison used to be. It is now a remodeled tourist attraction. Boats go from wharf to sightseeing of the whole city and the bay and the Golden Gate bridge.
The Golden Gate Bridge is special because it connects the northern part of the city across the bay with Mair County. The reddish color of the massive and impressive bridge gives the city a distinctive look. The bridge can be crossed on foot. By car, you can head to the charming Sausalito or Muir forests with giant ax trees. There is a Muir lookout nearby, offering ocean views and steep cliffs that descend into the sea.
Golden Gate Park is located south of the bridge. This huge space has a size of several square kilometers. It offers an escape from the hustle and bustle of the city and is a great place to pick up and unwind.
San Francisco has miles of beach. Endless long beaches, with numerous joggers, surfers, dog walkers and the noise of the mighty ocean and large waves, will give you an indescribable feeling of freedom and will not leave you indifferent.
Parallel to the large beach stretches the Great Highwas highway that connects north and south. Formerly the main road and today it is a two-lane road. It is still considered the most scenic and charming road in California. The stretch from San Francisco to Los Angeles is the most impressive.
The winding street leads you to Twin Peaks. It rises above the start of Market Street and the Castro town district. A view of the Golden Gate (from afar), the wider city center with the Transamericana (pyramid shaped) and all over Market Street will give you the true grandeur of this magnificent city.
It should be noted that the vibrant Castro quarter (in the city of San Francisco), although known for its gay population, is full of bars, restaurants and shops.
Not far from Union Square is Chinatown. Numerous streets are full of Chinese shops and are most lively in the morning. Fresh fruit and vegetable stores, seafood, and various merchandise offer a truly impressive choice. Vote for America’s largest and most populated Chinatown. The Dragon Gate is the gateway to Chinatown and has often been portrayed in movies.
https://www.city-sightseeing.us
An excellent vantage point near the city is Telegraph Hill with its Coit Tower. For a $ 4 ticket, you’ll have a great view of the city from all sides. A great destination for an afternoon or evening getaway in the city is the Haight-Ash-bury section of the city bordering the Castro neighborhood and Golden Gate park. They find it crazy and fun, but it offers a number of cafes, restaurants, musicians and performances that you can meet on the streets.
https://www.sftravel.com/video/big-bus-tours-san-francisco-open-top-sightseeing-tour-video
San Francisco is a city where something is always happening. You can visit numerous exhibitions, concerts, theaters or outdoor festivals. It is a city that offers a diverse selection of daytime entertainment and night out.
http://www.clifthotel.com
https://www.sftravel.com
https://www.visitcalifornia.com
photos: http://www.unsplash.com

Hello, everyone! My name is Nadiia, you probably noticed, I have another blog about healthy eating and sports, it is my passion) As for this blog, I just decided to share my thoughts, my feelings. Do not judge, I am not a professional writer, I just trying to express myself.