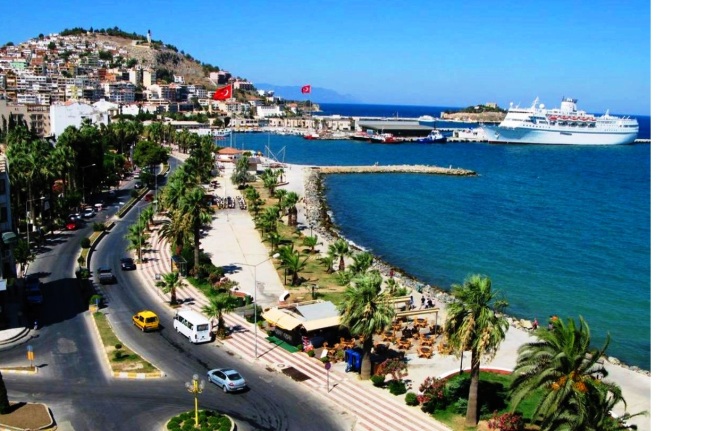 Tourists are coming to this part of the world because of the red healing mud. You can rejuvenate for 5 years in just ten minutes of bathing in healing mud.
1. Kuşadası is located about 90 kilometers south of Izmir in the bay of the same name. The city is Turkey’s most popular resort on the Aegean coast. The name of the town comes from a small island called “bird island” with which it is connected by a narrow embankment.
2. There are over 900 hotels and accommodations for guests and travelers in Kuşadası. The summer season begins in early June. The town has a population of about 70,000. During the summer months, the city is visited by around 500,000 tourists from all over the world. By minibus (dolmuş) you are connected to the city center or the beach at any time.
3. Thanks to the good connection of the largest national airline Turkish Airlines with the rest of the world, it is easy and possible to reach this city all year round. Tourists use bus lines or organized travel through travel agencies.
https://www.turkishairlines.com/
https://www.facebook.com/turkishairlines

https://www.instagram.com/turkishairlines
https://www.youtube.com/channel/UCSK1_qvsEuTNZnvLQvNRLGQ
https://www.linkedin.com/company/turkish-airlines
http://blog.turkishairlines.com/en
4. The city offers sunbathing on sandy beaches (public or hotel), a variety of evening and nightlife (a famous carriage ride) or a wealth of historic monuments, and a full-day stroll through city streets and squares full of diverse shops. You can visit the Aqua Family Water-park just 5 minutes drive from the city.
5. Cultural and historical heritage from the time of ancient Greece, proximity to Ephesus, attractive excursions are just additional attractions that the city offers to its visitors. Ephesus is an ancient and well-preserved ancient Greek city only a 30-minute drive away. Here you can visit one of the most preserved libraries of antiquity (the Celsius Library). You need to try Ephesus beer and the so-called Mado ice cream while in Ephesus.
6. Kuşadası has a typical Mediterranean climate with warm summers and mild winters, so the tourist season lasts a long time. The clear blue sea and the abundance of beaches (7 large and long sandy beaches) and the bay are the symbols of the city. The most famous beaches are: Long Beach (20km), Ladies Beach (2km), Kustur Beach (4.5km) and Pamucak Beach (12km). On a clear day it is possible to see the Greek island of Samos, just over an hour away by boat.
7. In the dynamic center of Kusadasi there is a Grand Bazaar / Market that will give you a sense of true Orient. The town market runs late into the night. A bargain is a must here. The market is full of stalls, shops and street vendors offering a variety of goods (textiles, leather, tea, carpets, spices, and more). It is best to buy spices for measurement, as you will be sure that they are fresh (gift packages with spices can be of doubtful shelf life). If you love the Turkish tea drinking ritual you can buy very cheap lala cay bardaklar glass glasses. High quality olive oil from domestic production (Tariş brand). The spices are varied (for example, “sumac” goes fantastic with salads and chicken, cumin or “corek otu” added to pies and cakes. Here you can try the so-called “street food” and almond, hazelnut, pistachio sweets that make Turkey famous in the world.
8. For the younger population, the city offers the famous Bar street, where you will have an incredible time until the early hours of the morning.
9. Apart from the mentioned Ephesus, there are famous ancient historical monuments in the vicinity of the city: Hierapolis (Pamukkale), Didima and Milet, houses of the Virgin that you can (optional) visit. Admission to Pamukkale is charged (about 2 Euros per person).
10. The ancient city of Ephesus changed its center in the past, due to the hydrography of the Kayster River, which deposited the area with sediments and brought in a huge amount of material. Over time, the river upgraded enough land to permanently separate the city from the sea.
The city of Ephesus today looks like a science fiction movie city. Architecture and everything in the city associate with the sea even though there is no sea. Of the Amazons who allegedly founded the city through Persian rulers and Alexander the Great, this is a city that has always recorded some form of development. It was the commercial and cultural center of the region with an ancient population of over 250,000.

Measured by today’s standards and scale, the figure would be about 2 million inhabitants. The city celebrated the goddess Artemis. It has remained known for hundreds of years as a goddess city that protects mothers and women. An interesting fact to the supporters of the interpretation of popular theories of religion is that the city was chosen by its second holy mother a couple of hundred years later – the Virgin, i.e. the Virgin Mary. You should visit the Gate of Augustus or the Hadrian Temple, or the Trajan Fountain, or perhaps the Church of John, built on the site of the tomb of John the Evangelist. However, the most interesting is the house of the Virgin Mary. The humble house represents the place where the Virgin Mary took refuge after her son’s death, the place where apostle John brought her according to tradition. . In the legends, this house is related to the residence of the Apostle Paul. The house is a religious and pilgrimage center and has 3 to 4 rooms. Many theists and atheists have reported very strange and positive reactions after visiting this house. Entrance costs 3 Lire for locals, and around 13 Lire for foreigners (6.5 Euros). If the entry price is too expensive, take the opportunity and take a walk around and look around the house. It is a local custom to be silent inside and not speak a word out loud. Bring a pen and paper because you can write down the wish and leave it in. Ephesus is just a locality today. All you need from city amenities is in Seldzuk (a town with 30,000 people 3 km from Ephesus). The bus costs around 1 Euro and is worth it if you want to shop and eat locally and see the Ephesus Museum.
https://www.ephesus.us/
Note: Tourists are coming to this part of the world because of the red healing mud. You can rejuvenate for 5 years in just ten minutes of bathing in healing mud.