Even today, people happily grab the button when they see a chimney sweep

cover page: http://www.vecteezy.com
Everyone knows that chimney sweeps are “heralds of happiness”. Meeting a chimney sweep represents happiness. This old belief is practiced all over the world. At that moment, we make a wish. We grab a button on our clothes to make our wish come true. The figure of the chimney sweep and the amulet-button have special meanings.
It is believed that an encounter with a chimney sweep is an encounter with happiness (especially in the morning if you meet him first). This belief has a very long history. The belief used to be tied to any person who has darker skin.
This, in turn, is related to the opinion that the souls of our ancestors can be embodied in the image of a stranger in order to visit us in “this world”. Since “that” world is underground, it is black. It is believed that the souls of our ancestors are our protectors and that our happiness depends on them. That is why it is lucky to meet a chimney sweep. The chimney sweep is the embodiment of the soul of our ancestors. Meeting a chimney sweep has the power to drive unclean forces out of our lives.
1529 The Ottomans besiege Vienna. That is when the story arose, according to which the chimney sweep saw the Turkish troops approaching Vienna and informed the authorities. Thanks to the chimney sweep, Vienna was defended from the Ottomans. Chimney sweeps have become a symbol of happiness.
There is a story related to the countess who was preparing a big celebration. When everything was ready for the celebration, black smoke started coming out of the fireplace. Slowly, but surely, he filled the whole yard. However, at that moment, two chimney sweeps came to the countess’s aid – they cleaned the chimney and thus saved the party. Since then, the Countess has been waiting for everyone as chimney sweeps bring happiness. 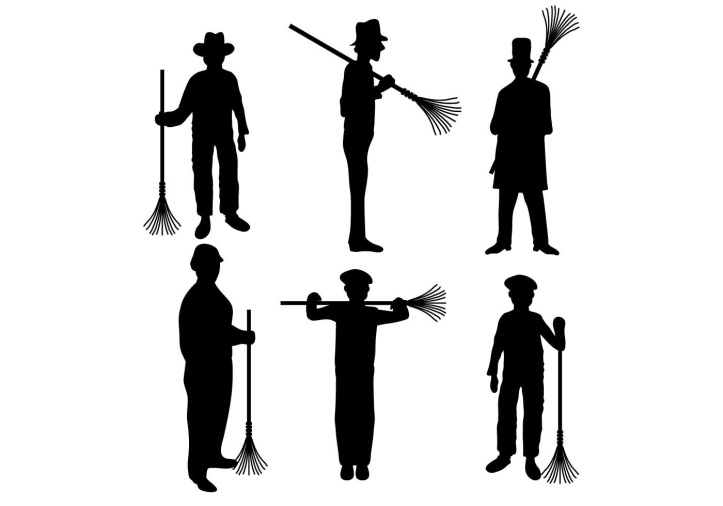 photo: http://www.vecteezy.com
The third story about chimney sweeps is similar to the second, although it has logic and beliefs. When the chimney is clogged, the smoke returns to the house. This means that the home “does not breathe” well. The smoke stays in the house. This pollutes the household and deposits negative energy. It is logical that when the chimney sweeps do their job and clean the chimney, the smoke comes out. At that moment, it represents the cleansing and personalization of the home from evil and negative forces.
Yet every time we grab a button when we meet a chimney sweep
It is a common habit to hold on to the button every time we see a chimney sweep. The connection between the button, the chimney sweep and other people could be explained as follows:
The button represents the “magic circle” of happiness (a kind of amulet). In order for our wish to come true, we should rub the button with our fingers when we see the chimney sweep.
What is the occupation of a chimney sweep?
After the arrival of winter, when the frost penetrates to the bones, we prefer to settle down by the stove or fireplace. In the stoves, wood crackles idyllic and flames sway. In addition to central heating with radiators, wood heating is the most common way of heating rooms. One of the necessary conditions for wood or gas to burn properly and safely are clean, controlled and tested chimneys and chimney fittings. This is the job of qualified chimney sweeps. One of the noble tasks performed by the chimney sweeps of the example is to check the correctness of the chimneys in the boiler rooms of buildings. Unfortunately, the number of chimney sweeps in the world is drastically declining from year to year. This occupation seems to be slowly fading and disappearing. Now, chimney sweeps in larger cities number only in the dozens, while there are hundreds in entire states.
A chimney sweep is a person dressed in a black work suit with a sooty face. The chimney sweep always carries the equipment on his back: steel cables, sharp brushes and a cord hung on his shoulder. It looks a bit like an American cowboy with a hair hanging on his shoulder. The chimney sweep sometimes carries small ladders on his shoulder to reach the openings of higher chimneys. Many associate this “black man” with austerity. On old postcards and greeting cards we see a chimney sweep riding a horse or a donkey (symbols of hard work). Unfortunately, almost no one writes postcards and greeting cards anymore. Saint Nicholas and Santa Claus completely suppressed the memory of the sympathetic sooty chimney sweep.
A chimney sweep is a savior of people because he often saves the lives of many careless people. If people do not clean the chimney, they could suffocate in carbon monoxide or cause a fire.
Chimney sweeps do various stunts on the roof
Many chimney sweeps have completed special training or most often a three-year chimney sweep school within other schools or the Construction Center. After acquisition
work experience (and guided by the proverb “I’d rather be a little boss than a big servant”), start independent entrepreneurial trades. These trades belong to communal activities. They cover larger areas and usually get a concession for a few (4 to 5 years), for which they pay a tax to the state annually. Unfortunately, this difficult and responsible job is little appreciated. Chimney sweeps have no subsidies or incentives
although they belong to deficient occupations. When doing their jobs, chimney sweeps, along with 50-meter factory chimneys for cleaning, crawl into large fireplaces, walk on the ridges of roofs like sleepwalkers. Sometimes they can slip but luckily
they quickly grab something tight and thus avoid injury. The good things about this profession are that chimney sweeps still have benefited work experience somewhere. It is positive that there is a lot of beauty in this profession. Chimney sweeps are constantly on the ground, on the move, meeting and meeting many people, helping people in need. That’s why they jokingly call themselves “humanitarians.”The goal is to meet the needs of users of their services. Although they have certain working hours, people call chimney sweeps for help at any time of the day or night. They find it hardest when they take a bath, change into clean clothes and relax. Then came the voice to burn, most often the chimney sometimes the house.
They have tradition, experience and knowledge. True, chimney sweeps who want to become professionals need to complete additional training for a master chimney sweep. Then they can competently perform all chimney sweep work on the maintenance of chimneys and fittings (cleaning, inspection, testing of chimneys and fittings, videos of the interior of chimneys and fittings, construction and repair of chimneys and fittings), ventilation and similar devices, cleaning and testing and firebox repairs, construction of industrial and tile furnaces, environmental pollution control. Maintenance and cleaning of kitchen exhaust systems, kitchen hoods, filters, fans, ventilation ducts and their videos.
The conclusion that emerges is that the chimney sweep performs all the tasks for which he is qualified – cleaning and maintenance of everything related to chimney sweeping. To be lucky in his work and life, the chimney sweep often clings to his own buttons.